Bitcoin is holding steady above the $29,600 support against the US Dollar. BTC needs to clear the $31,350 resistance to start a decent rise.

Bitcoin price found support near the $29,000 zone and started a new rise. There was a clear move above the $29,500 resistance zone and the 100 hourly simple moving average.

Bitcoin is now trading near the $30,000 level and the 100 hourly simple moving average. There is also a key bullish trend line forming with support near $29,650 on the hourly chart of the BTC/USD pair. An immediate resistance is near the $30,600 level. 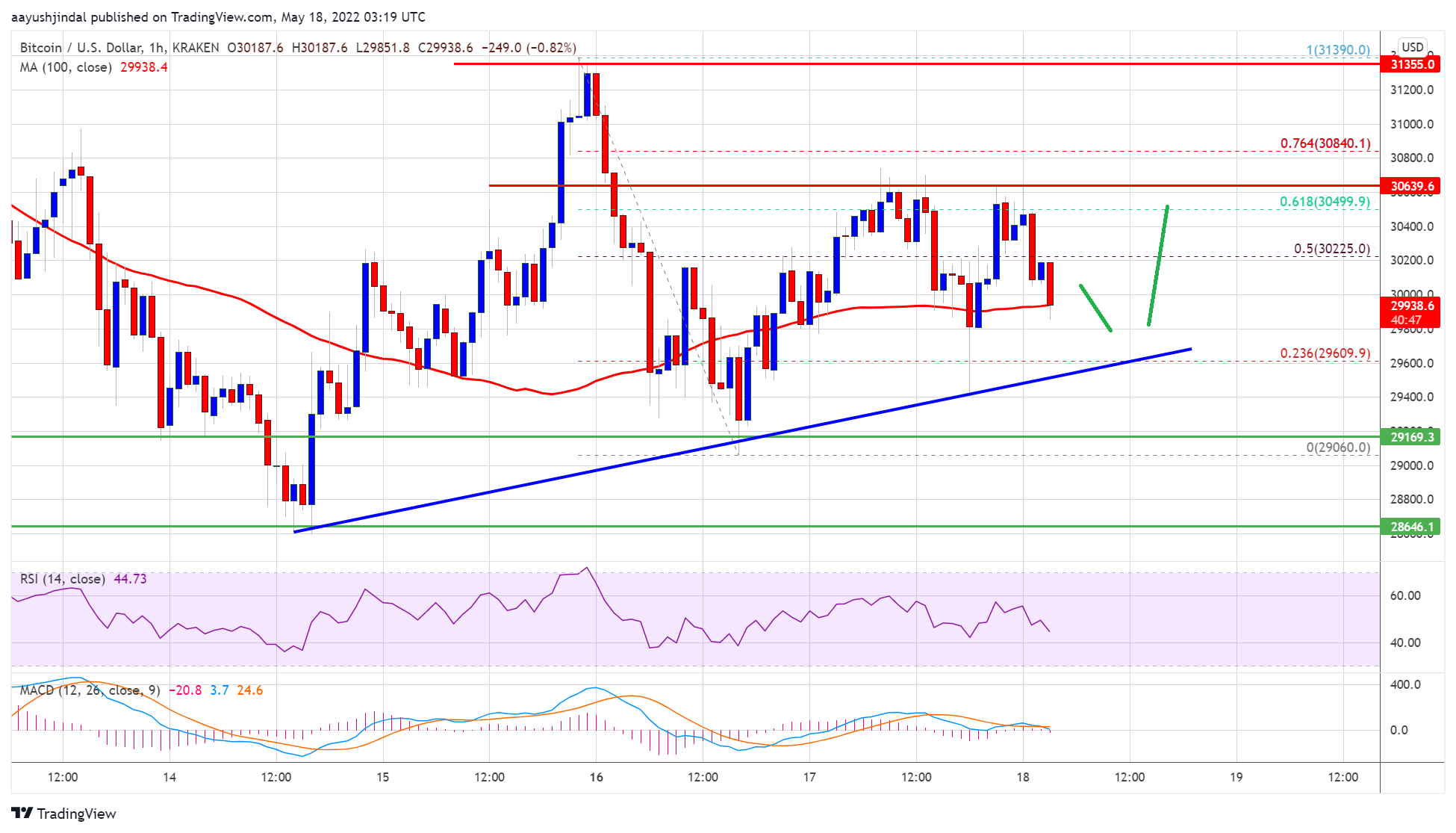 If bitcoin fails to gain pace above the $30,600 resistance zone, a new decline could begin. An immediate support on the downside is near the $29,650 level.

Hourly MACD – The MACD is now slowly picking up pace in the bearish zone.

Hourly RSI (Relative Strength Index) – The RSI for BTC/USD is now below the 50 level.

Did Celsius trigger the domino effect? Almost a month ago, The Block Crypto reported that Celsius mined at least $500 million from the Anchor protocol before the crash. Two weeks ago, blockchain analytics firm Nansen identified Celsius among the seven major wallets that allegedly triggered the Anchor bank run. Recently, Celsius responded. Is this the…

On Saturday, May 28, 2022, LUNA classic and UST classic holders received an airdrop consisting of new LUNA 2.0 tokens based on two blockchain snapshots. The first recorded value of the crypto asset at 5 am (ET) was $14.31 per unit and it reached an all-time high (ATH) about 20 minutes later at $18.87 per…

Who is putting their money where their mouth is? Mr. Wonderful AKA Kevin O’Leary is. As one of the leading advocates for the need for green bitcoin mining in the industry, Mr. Wonderful invested in Bitzero. And now they are announcing that the company will build its North American headquarters in North Dakota. Why is…

Moneygram, a US-based payments and remittance company, has announced the integration of USDC, a dollar-pegged stablecoin, as a settlement asset for its cash-to-crypto and crypto-to-cash program. The company will first allow users to exchange USDC for cash and vice versa in certain markets, including Canada, Kenya, the Philippines, and the US, with the expectation of…

Cardalonia, a Cardano Metaverse project, has announced the launch of its staking platform, and according to the roadmap, a user-playable NFT clan on the Cardalonia Blockchain is scheduled to launch in late 2022. Cardalonia, when fully launched, will allow users to customize their experiences in the Cardano virtual world, where players can build, own Lands,…

Nox Bitcoin, a cryptocurrency exchange in Brazil, has taken the unprecedented step of using its own funds to reimburse customers for their TerraUSD coins at the full rate. Following the local media report on May 20, the Nox Bitcoin exchange has refunded all UST holders at a rate of $1 with Tether USDT. The report…